The Jewish Museum Augsburg Swabia sees itself as a historical museum that refers to the Jewish history of Bavarian Swabia in relation to current social issues.

It is a place where aspects of migration, integration, homeland and culture are discussed from the perspective of a minority. And it is a place where it is shown that diversity is neither a threat nor an enrichment, but a normality.

The Jewish Museum was founded in 1985 in the Great Synagogue of Augsburg as the first independent museum in the Federal Republic of Germany dedicated to the history and culture of Jews. Erected at the beginning of the 20th century, the synagogue survived the pogrom of November 1938, and is now a unique testimonial to German-Jewish culture and once again the center of a Jewish congregation. The sanctuary may be viewed when visiting the museum. A section of the permanent exhibition is dedicated to the architecture and history of the impressive building. Since 2014 the former synagogue of Kriegshaber, nowadays a suburb of Augsburg, serves as a branch of the museum. The oldest preserved synagogue building in the region, for almost 300 years it has been the center of a thriving Jewish rural community which disappeared due to migration into the cities and destruction during the Nazi era.
Ritual objects dating from the 17th to the 20th century form the nucleus of the collection. Most of the silver Judaica come from annihilated Jewish communities in Swabia and were made by renowned Augsburg goldsmiths, showing astonishing links between Jewish and Christian culture. Over twenty Torah shields function as reference points in the permanent exhibition. Embedded in their historical context, they tell of the former Jewish communities’ religious beliefs, geographic dispersion and social makeup, as well as of their interaction with the Christian majority. Objects on loan from the Bavarian National Museum in Munich and private collectors supplement the collection. 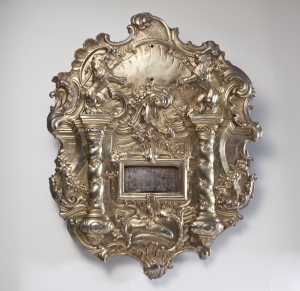