The Jewish Museum Merano is located in the basement of the synagogue, some objects are on display on the ground floor at the entrance (a sefer Torah of late 1700 and 2 Meissen porcelain object donated by the Kaumhaumer family after their Nazi-seized collection was returned to them). The synagogue is entirely the original building of 1901, with its surrounding park. The museum was inaugurated in 1996. It displays  documents and objects testifying the Jewish presence in Merano from the mid 1800’s to the publishing of the Racial Laws by the Italian fascist government in 1938. Its goal is to preserve memory of the existence of the racial laws and to demonstrate the active role of Jews in making Merano a prime tourist destination in Europe.

In the late 1800’s Merano was in the territory of the Jewish community of Hohenems (Austria). There were strong demands for having a synagogue. The business was booming and more and more Jews were either moving to Merano or coming for holidays. A Jewish family from Hohenems created a foundation: the Königswarter Stiftung. Enough money was collected in order to open, in a matter of less than a decade a synagogue, a sanatorium for Jews in need and a cemetery. The synagogue was inaugurated on March 27, 1901. The resident Rabbi between 1905 and 1907 was the famous Aaron Tänzer. After World War 1 Merano became part of the Reign of Italy and the fascist Ministery for Religious Affairs granted the creation of the Merano Jewish community in 1927. Until the Italian Racial Laws Merano hosted a stable population of more than 1000 Jews, many of whom stayed for tourism more than some months at a time.
The collection is mainly documental and comes from public as well as private donations. Highlights are: some documents clearly stating a person’s belonging to the “Jewish race” as per Italian Racial Laws; 2 Torahs of the 1700’s (one Sefardi and one Ashkenazi); hotel Bellaria’s registry with Chaim Weizmann’s signature as one of their hosts (the future first President of the State of Israel); two Meissen porcelain figures (18th century) donated by the Kaumheimer family after the Merano Jewish community received them back from an institution in 2002; a travel-sized Torah that belonged to Moritz Lazarus (founder of the Völkerpsychologie – national psychology) and his wife Nahida Ruth Lazarus. 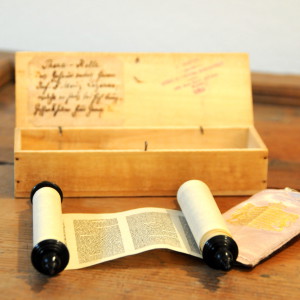