ANU – Museum of the Jewish People, is a unique global institution which tells the ongoing story of the Jewish people. Our Mission is

·     To nurture a sense of belonging among Jewish visitors and to strengthen Jewish identity.

·       To serve as the central address for Jewish discourse, engagement and learning for Jewish individuals, families, communities and organizations from Israel and around the world.

ANU – Museum of the Jewish People is more than a Museum. This unique global institution tells the ongoing and extraordinary story of the Jewish people. The Museum of the Jewish People connects Jewish people to their roots and strengthens their personal and collective Jewish identity. The Museum of the Jewish People conveys to the world the fascinating narrative of the Jewish people and the essence of the Jewish culture, faith, purpose and deed while presenting the contribution of world Jewry to humanity. The Museum opened in 1978 thanks to the vision of Nahum Goldmann, president of the World Jewish Congress 1954-1977. In 2005, the Israeli Knesset passed the Beit Hatfutsot Law that defines Beit Hatfutsot as “the National Center for Jewish communities in Israel and around the world”.
The installation "Wisdom of the Generations" © Roni Canaani
Four Spectacular Wings Tell the Story of the Jewish people: It was well worth the wait, and now you can’t allow yourself to miss it: after ten years of planning and construction, the largest Jewish museum in the world is opening its doors. You’re invited to join a fascinating journey that portrays the story of the Jewish people through the generations and up to the present time. The Museum represents all parts of the Jewish people and highlights the creative works and cultural riches of a variety of communities in different periods of history. This story is about all of us and each and every one of us is part of it. The Mosaic Identity and Culture in Our Times The story begins in the present. The incredible diversity of the expressions of Jewish identity and culture enables each and every one of us to find something of ourselves here. The folklore and the arts, the language and the literature, the different denominations in Judaism, and the Jewish contribution to humanity – all these are manifestations of multifaceted Jewish identity and culture, whether individual or collective. The Journey The Historical Story Through the Generations This is the unique and ongoing story of the Jewish people, from ancient times and up to the present. In it, you can find chapters of growth, prosperity and cultural dialog, alongside periods of pogroms and persecutions. The journey, which extends over thousands of years, begins with the story of the Jewish migrations, examines the large centers of Jewish life as well as Jewish culture and scholarship, and ends with the rebirth of the Jewish people after the Holocaust, the establishment of the State of Israel, and a depiction of various Jewish communities in our times. The Foundations A Common Base, A Universal Message The ideological foundations on which Jewish existence has been built over the years – are foundations which have both a particular-Jewish dimension as well as a general-universal dimension that has bearing on human civilization as a whole. The unique foundations include the Sabbath (Shabbat), the covenant, the cycle of the year and milestones in human life. The universal foundations are exemplified by the Bible and its impact on cultures around the world. 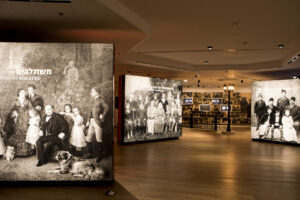 The Modern Era Square: visitors can see how the Jews in different geographical areas faced the challenges of the modern era, such as emancipation, equal rights and education. © Roni Canaani