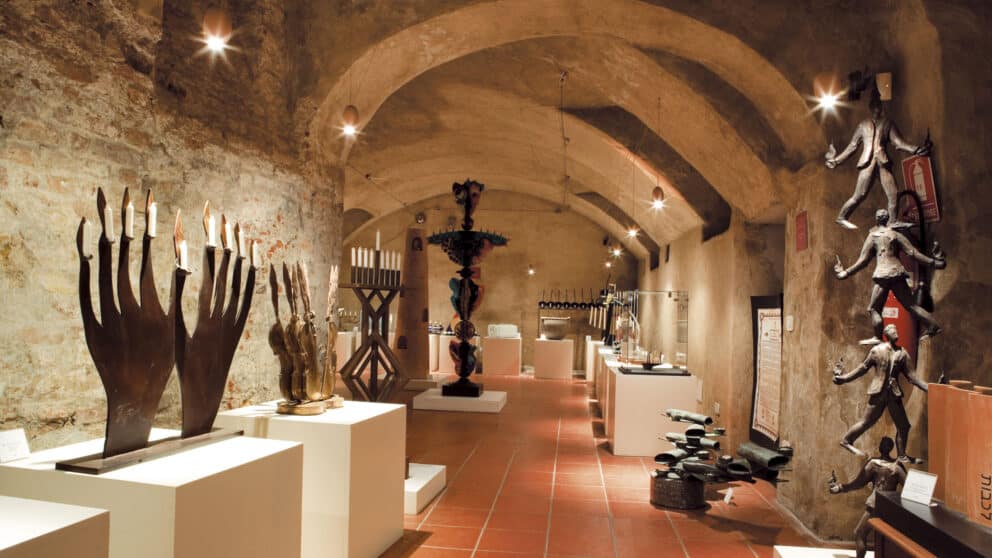 The complex where the Jewish Museum is located, with its magnificent hidden Synagogue, is a Piedmont’s Baroque masterpiece. In the heart of the old ghetto, it has been declared a national monument and enjoyed unexpected growth over the past years.

Through the tireless work of the only two Jewish families still living in town, the Museum of Ancient Jewish Art and History, the Synagogue, the Museum of Light and the Archives are, quite deservedly, one of the major tourists draws among Jewish Italy. Inaugurated in 1969 the Jewish Museum occupies the two floors of the women’s gallery of the Synagogue and some adjacent rooms.

The first records of a prayer hall of the Jews in Casale Monferrato date to 1590. The Synagogue, inaugurated in 1595, was modified and enlarged over the course of the centuries. It occupies one side of what is now Vicolo Salomone Olper and has maintained its original anonymous look with a façade just like other buildings and a small, unimposing door. From 1848 to 1866, as the Casale Monferrato Jews grew accustomed to their newfound freedom, the Synagogue was expanded, restored and decorated at the initiative of Rabbi Salomone Olper. Of the many inscriptions found in the walls, in the third upper row is a phrase of ecumenical grace from Isaiah 56:7: “chi biti bet tefilà, ikra le kol amim,” “for my house shall be called a house of prayer for all peoples.”

The Jewish Museum is composed by four parts: the synagogue, the ancient Jewish art museum and the Lights Museum. The Synagogue, surrounded on three sides by the women’s galleries, lit by 14 broad windows with large gilded and its gold-tone paintings and stucco ceiling, is now perfectly renovated. In the Ancient Jewish Art Museum, the entire artistic heritage of the Jewish community is entirely displayed ranging from religious ornaments to items of everyday use and study including Torah scrolls sumptuously embossed, engraved and filigreed by local artisans. The Lights Museum, is composed by almost 250 modern Hanukkah lamps.

The Quincentennial Foundation Museum Of Turkish Jews tells the story of 700 years of amity between Turks and Jews. The aim…