The Elie Wiesel Museum. Jewish Heritage Museum from Maramures, part of Maramures Museum Complex, connects people with Jewish Maramures’ lived experience through the legacy of Nobel Peace Prize Laureate Elie Wiesel. The story we tell is one of a particular place and people, growing through reflection, interaction, and exchange. We capture the once cultural, historical, and economic center of the region’s complexity and contrasts through the museum collections, exhibitions, and programs. We summarize what we do in three words: discover, preserve, and engage in passing the legacy. It is our responsibility and our mission. 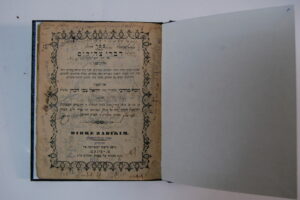 The first Jewish book printed in Sighet (1874), one of the important printing centers in Transylvania. The author, Rabbi Yosef Mordechai Ha-Cohen, who also lived in Sighet, managed to get acceptance letters from several of Maramures rabbis in order to publish this book. The book is part of dr. Ascher Ben Shmuel collection (donation).