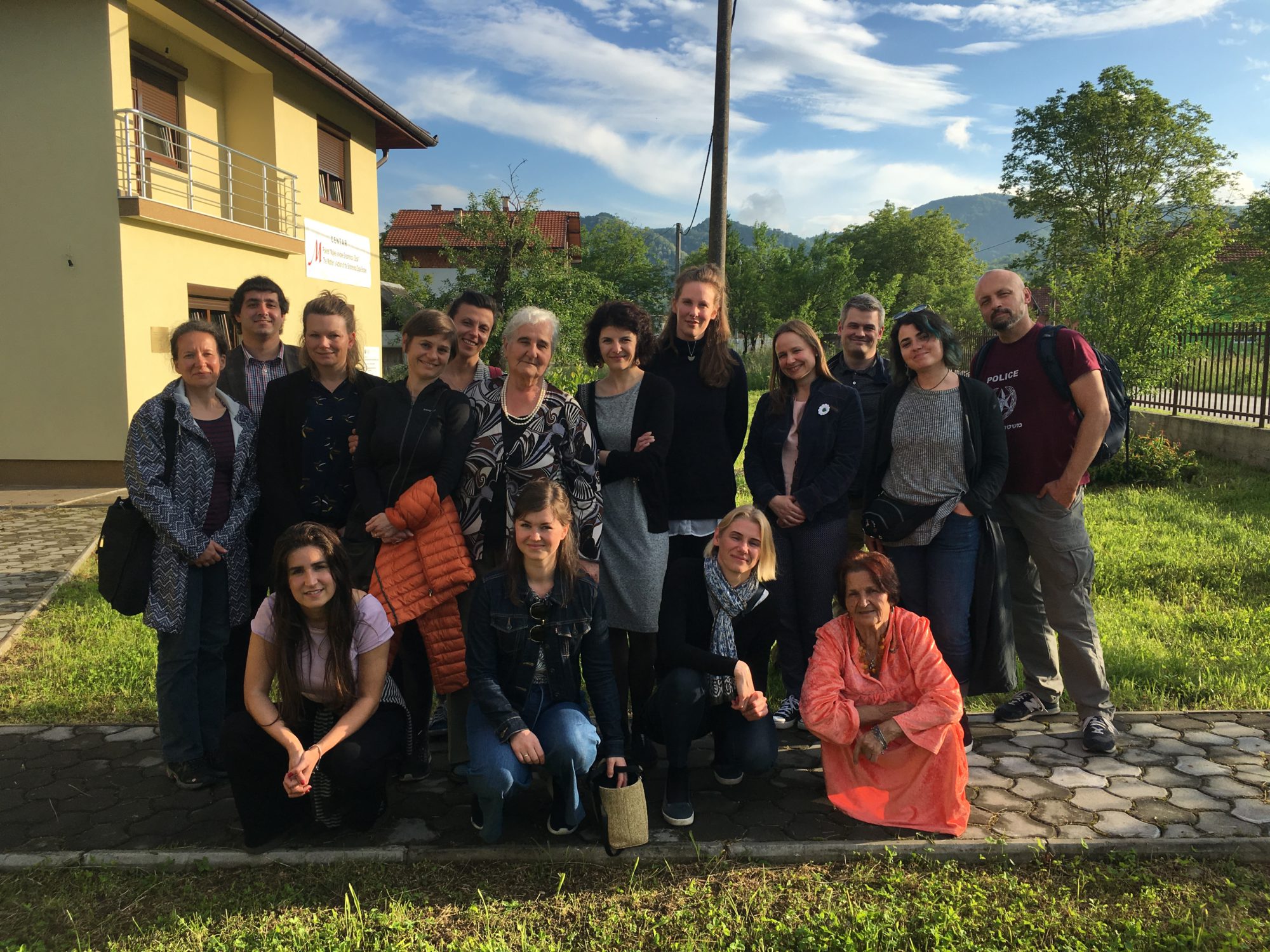 In close cooperation with the History Museum of BiH, AEJM organised a study visit to Sarajevo for museum educators. During two days, an international group of 13 educators from across Europe learned about museums and education in Sarajevo, and explored the rich Jewish history and heritage of the city. On the third optional day the group travelled to Srebrenica.

The programme kicked off with four project presentations by delegates: Cultural Diary, a project that supports cultural education and engagement wherein the Center of Jewish Cultural Heritage Synagogue Maribor participates; the educational programmes of the children’s exhibition King Matt’s Poland at POLIN Museum of the History of Polish Jews; the programme Places That Tell a Story from the Jewish Cultural Quarter for students of vocational education in the Netherlands; Anti Discrimination Education Academy , the teachers training course by the Auschwitz Jewish Center in collaboration with other Polish partners. All presentations are available in the Project Exchange section for educators on AEJM’s website.

At the History Museum the group received a curatorial tour by Tijana Križanović through the exhibition Sarajevo Under Siege that shows personal objects of everyday life collected with and from Sarajevo citizens. Aurora Jacobsen Evenshaug, educator at Jewish Museum Trondheim (NO) and beneficiary of the Mobility Programme: “I take with me their experiences of gathering testimonies and museum objects from the community. I think this makes the exhibitions more personal and concrete, and it gives the community a sense of ownership, which may benefit the museum.”

Afterwards curator Elma Hodžić led a workshop on a recent acquisition of the museum, a collection of small but detailed plasticine fantasy figures created during the siege by a Sarajevan philosopher. Participants discussed the educational and curatorial potential of the objects. Afterwards the group visited the Vraca Memorial Park together with curator Elma Hodžić. This park was used as killing site during WWII and is the main memorial for dedicated to the citizens of Sarajevo that were murdered during WWII, mostly Jews. The memorial is listed as national monument, but is nowadays neglected and not taken care of.

At the War Childhood Museum the group was welcomed by development director Elma Mahmutović. The museum focuses on childhoods that have been affected by war. It opened its first permanent exhibition in 2017 and the following year received the Council of Europe Museum Prize. The participants also visited the Bosniak Culture Institute, a private museum, library, gallery and cultural centre housed in a former Ottoman Hammam.

The team of the National Museum showed our group the famous Sarajevo Haggadah, which dates back to 14th century Barcelona, as well as the Ethnological Department with Jewish costumes. Together with historian Eli Tauber the group visited the Jewish cemetery of Sarajevo. The cemetery, one of the largest in South-East Europe, was in use from the second half of the 16th century until 1966. During the 1992-1995, the cemetery was on the front line and many tombstones were damaged in the course of battle. After a visit to the Jewish Museum, Eli Tauber also took the group on a Jewish city walk along former synagogues and the active Ashkenazi synagogue.

Larysa Michalska, Education Manager at the Galicia Jewish Museum in Krakow (PL) and beneficiary of the Mobility Programme: “I considered Sarajevo as a special place, like a melting pot where cultures, traditions, religions and ideas are constantly mixing. It is a city where one can find synagogues, churches and mosques in one neighborhood. But it is also a city where one can find ruins, bullet holes and the shadow of the last war. Nonetheless, it is visible that cultural life and the sphere of memory and commemoration is developing. During this study trip we had a chance to visit local museums and learn about the difficulties they are facing.”

An optional excursion to Srebrenica on the third day was attended by almost all participants of the study visit. Elma Hodžić, originally from Srebrenica herself, accompanied the group. At the Srebrenica Genocide Memorial in Potočari, the group was welcomed by Hasan Hasanović, curator at the Memorial. Hasanović gave an historical introduction to the site and events during the siege of the city that served as a Muslim enclave from 1992-1995. As one of the genocide survivors, Hasanović also shared his experiences and personal perspective with the participants. After lunch the group was warmly welcomed by Munira Subašić and Kada Hotić of the Mothers of Srebrenica, an association of women and survivors whose relatives were killed in the Srebrenica massacre and who advocate for justice for the victims.

Aurora Jacobsen Evenshaug (NO) on the excursion: “I will especially remember our visit to Srebrenica. Listening to Hasan tell his story was intense, difficult, educational and meaningful. His testimony, the following documentary, and reading and wandering through the exhibition made it clear to me how little prior knowledge I had about the genocide there. […] The visit made clear the importance of continued education in citizenship, critical thinking, prejudice, tolerance and communication, and in the ability to expose demagogues, conspiracy theories and opinions based on prejudice […]
Seeing a new place, meeting new colleagues, experiencing and learning new things and exchanging experiences, motivated and inspired me to continued work on history, religion, traditions, citizenship and critical thinking at my own museum.”