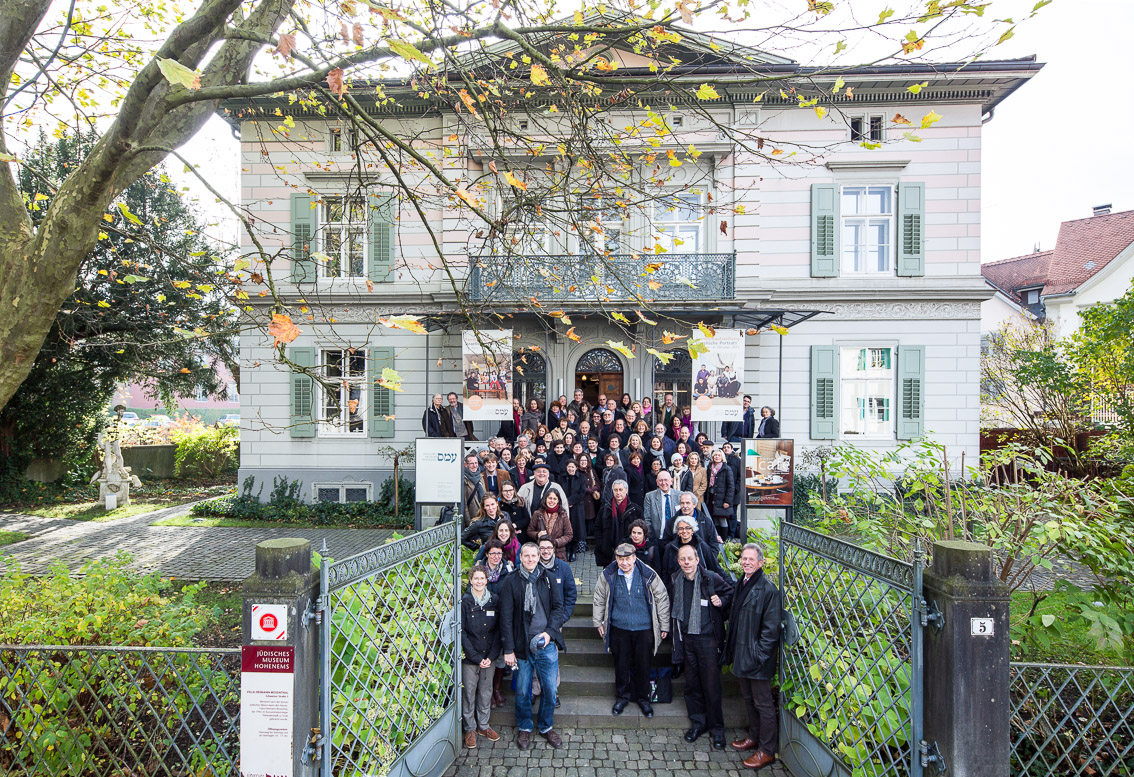 From 16th to 20th November 2013 in the Jewish museums of Munich and Hohenems the members of the Association of European Jewish Museums met for their Annual Conference. 80 participants – coming from Dublin to Jerusalem, from Oslo to Rome, and from Riga to Toledo – for five days discussed the future of Jewish museums in Europe, planned joint activities and visited

Focus of the program – under the title Where We Are. Site, Space and Context – were key note lectures, workshops, discussion panels and museum’s presentations on questions of the relation between museums and their respective urban and historical space, with political interests in the society, and with the expectations of their respective audiences.

Dr Jörg Skriebeleit, director of the KZ-Memorial at Flossenbürg in Bayern, opened the conference – taking place 70 years after ‘Kristallnacht’ – with his remarks about the contradicting proximity between the memories of National-Socialist terror and Jewish life, which is inscribed into the postwar history of locations like Flossenbürg and the neighboring town Floss, but like this in many places of Europe too.

Dr Felicitas Heimann-Jelinek discussed the diverse success stories of Jewish museums with an eye to their background of interests and conflicts in society, making Jewish museums kind of text cases for identity and a site of a somewhat elitist creation of meaning – something that can be a challenge and a problem for the museums alike. She encouraged the museums to confront these interests with both self-confidence and self-awareness, and to take the chance, „to address Jewish history and experience also as a pattern of other minorities’ histories and experiences“. „With the Jewish experience of migration Jewish Museums generate also new memories, they make the historical and cultural memory more dynamic“.

In various workshops about curatorial and educational practice it became clear, that confronting these challenges also means to confront visitors and visitors communities with an attitude of openness, a culture of curiosity, rather than with a monopoly to educate.

According to Silvia Planas, director of the Museum of Jewish History in Girona the Conference offered “productive and interesting workshops that were equally productive and interesting, also focusing on the theme of the site, space and context. The workshop devoted to educational practice proposed a special and difficult question: try to make yourselves feeling uncomfortable in the museum or visiting the museum. And from there, try to think what things, situations or issues within your museum can cause discomfort and, therefore, reject potential visitors: an interesting experience of internal and external reflection.”

“Another positive feature of the Conference was its mobility – the opportunity to see exhibitions, collections and different Jewish museums. […] This small town of Hohenems has no Jewish community today, but there is the Jewish Museum, a restored synagogue building, used as common cultural and community centre. This is an instructive example for contemporary Galician towns – Drohobych, Zhovkva, Brody, where unique synagogues are deteriorating.” says Vita Susak from The Lviv National Gallery of Arts in Ukraine and consultant of the Keter programme who participated in the Conference.

On Wednesday 20 November a group of 25 delegates participated in an excursion to Switzerland. After a guided tour of the late 19th century Synagogue of the Jewish Community Basel by architect and historian Dr Ron Epstein, the group was welcomed at the Jewish Museum of Switzerland in Basel. Director Dr Gaby Knoch-Mund and founding director Dr Katia Guth-Dreyfus guided the participants through the permanent and temporary exhibitions of the museum. In the afternoon the group visited the private Braginsky Collection in Zurich. Dr Emile Schrijver, Professor of Jewish Book History and curator of the Bibliotheca Rosenthaliana of the University of Amsterdam gave an introduction to the collection of Jewish manuscripts.

An impression of the first two days in Munich are available online.