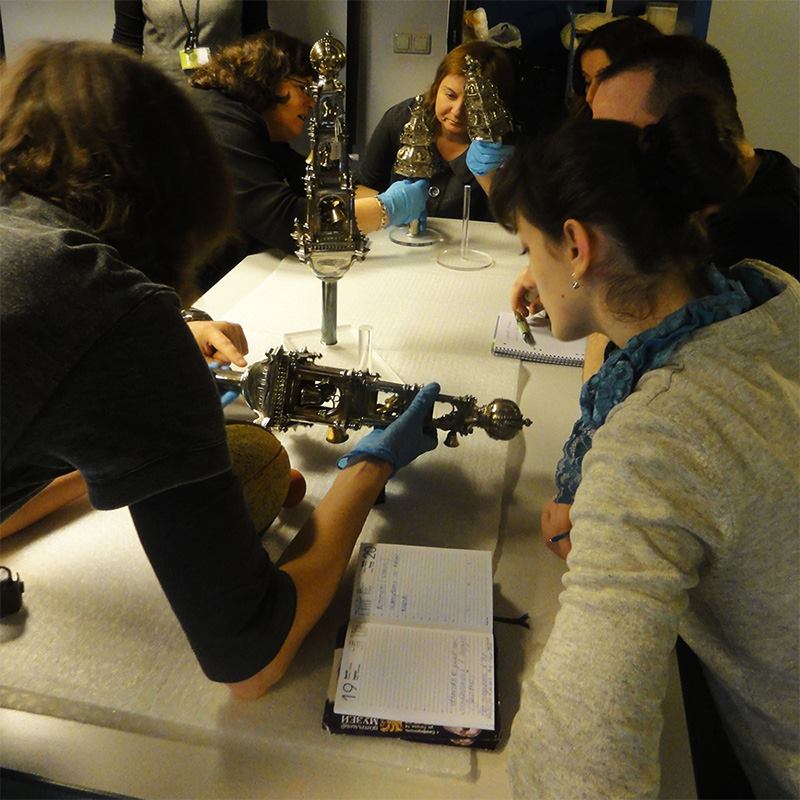 The fifth edition of the Curatorial Education Programme (CEP) took place from 2 until 5 March 2014 at the Jewish Historical Museum in Amsterdam. The 2014 programme was developed and organized in close cooperation with Dr Felicitas Heimann-Jelinek, Amsterdam curators Mirjam Knotter and Julie-Marthe Cohen, head of the collection department Irene Faber, and Emile Schrijver of the Bibliotheca Rosenthaliana.

Curators from eighteen European Jewish museums participated in an intensive four-days programme with workshops, lectures and discussions on curatorial practice in Jewish museums. The programme started with a lecture on the history of the museum by Julie-Marthe Cohen and Mirjam Knotter, followed by a tour through the different museum spaces, including a visit to the Ets Haim Library.

The collections of the Jewish Historical Museum and the Portuguese Synagogue offered the possibility to explore both Ashkenazi and Sephardic Judaica objects. The comparative workshops largely focused on the identification and interpretation metal and textile objects and a selection of objects from the museum’s storage rooms. The issue of provenance research was discussed during a special workshop by Julie-Marthe Cohen and Felicitas Heimann-Jelinek. During a workshop at the Bibliotheca Rosenthaliana Emile Schrijver lectured on the history of Jewish books in Amsterdam and introduced several treasures of the manuscript collection of the library.

The group furthermore participated in a joined programme together with the participants of the seminar (Re)shaping the (re)presentation of Jewish Culture, organized by the Rothschild Foundation and Paideia the European Institute for Jewish Studies in Sweden, wherein they analysed the different galleries of the Jewish Historical Museum.

Christina Meri, curator of the Jewish Museum of Greece in Athens, tells: “I was impressed by the splendour of these Amsterdam Sephardic artefacts, and I clearly realized here that every Sephardic community developed its own more or less unique tradition and style dependant on its locality, history and exegesis of the Jewish law.” According to Daniela Schmid, curator of the Ariel Muzicant Collection in Vienna “one of the most important outcomes of this programme was the widening of our perspectives of history, provenance and ritual context of objects, next to focussing our awareness of Sephardic Judaica and its particular features. These sharpened thoughts will highly contribute to my daily work of cataloguing Judaica.”