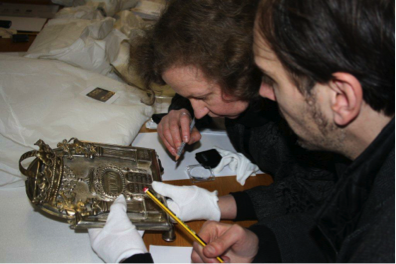 Fourteen curators participated in an intensive four-day programme with workshops, lectures and discussions on curatorial work in Jewish museums. The programme started with an introduction workshop on how to include Judaica in temporary exhibitions by Felicitas Heimann-Jelinek, curator of the exhibition A time for everything. Rituals against forgetting. Otto Lohr presented an overview of different approaches towards the preservation and reuse of Jewish built heritage in Bavaria. In his workshop the participants were invited to come up with proposals for the case study of the former synagogue in Obernbreit.

In a region with a strong tradition in producing silverware, the workshops at the Jewish Museum Augsburg-Suabia by Benigna Schönhagen and at a private collection by Felicitas Heimann-Jelinek focused at the identification and interpretation of silver Judaica objects. In Augsburg the group visited the silver department of the Maximilianmuseum for a cross-referential workshop on the rich history of Augsburg silverware production. With his workshop on fakes and forgeries, Bernhard Purin gave insight in another important aspect of the identification of Judaica.

“So what did I take home? Aside from connecting with wonderful people from all over Europe I got a deeper understanding into the various dimensions of Judaica. I learned what to look for, what reference books to use, and most importantly, whom to contact, if I’m confronted with a questions in the field of Judaica.” says Michal Grünwald, who recently started working as curator at the Jewish Museum Frankfurt.