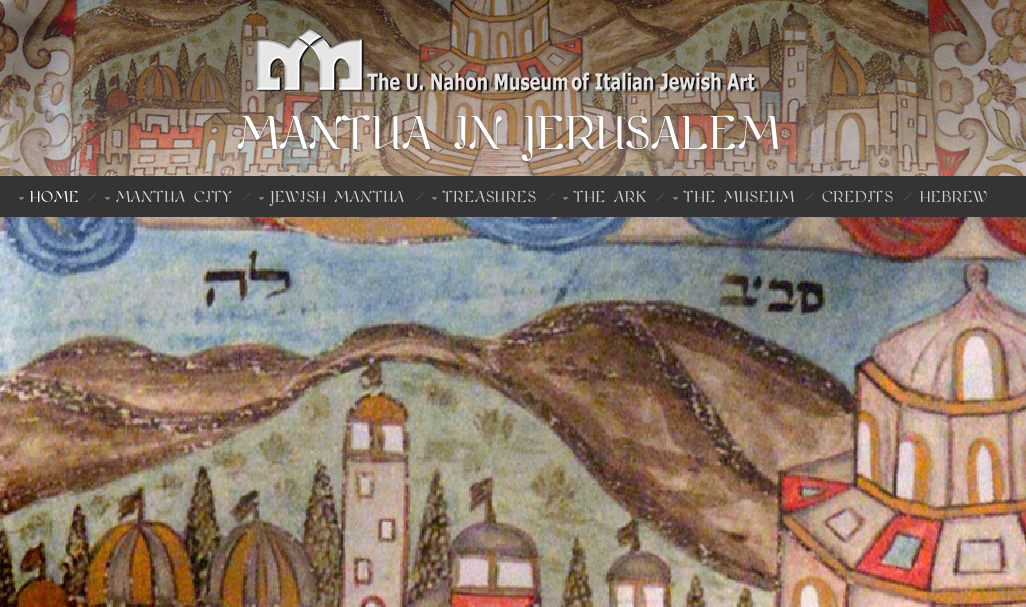 Interactive Virtual Exhibition by the U. Nahon Museum of Italian Jewish Art

The first virtual thematic exhibiton hosted by the Israel Ministry of Culture National Museum Portal was created by the U. Nahon Museum of Italian Jewish Art in Jerusalem. It is a pioneer project that aims to bring the beauty and cultural significance of the museum to a worldwide audience, by telling the story of the Jewish Community of Mantua, one of the most important, creative and flourishing in Renaissance Europe.

Navigating through the website a visitor may discover the story of the Jewish Community of Mantua, from the 11th to the beginning of the 20th century, virtually visit the town, discover its thriving Jewish life, visit its synagogues and hear the music composed by the Jewish Mantuan composer Salomone de Rossi. The narrative site includes bird’s-eye views of the city landscape, music, videos, cultural life, and a 360° tour of the Synagogues of Mantua.

The website, Mantua in Jerusalem started with the story of the Mantua Ark, central to the community in the past and central to the museum today. This magnificent object symbolises the wanderings and dispersion of the community over the centuries until its gathering in Jerusalem. In wishing to visualise the Ark in the best way possible it was decided to embark on a project of recreating a digital interactive three dimensional replica to be exhibited in the web site. This was an undertaking, the magnitude of which has rarely been done in Israel, if at all. The 3D model is infused with hotspots of interest. Touching them enables the viewer to learn about the ark, its symbols, its meaning and its use.

The project takes into account that the changing role of a museum today entails not just the presentation of objects, but placing them into a narrative context, a story which will give them meaning and relevance. Thus the narrative website exhibition “Mantua in Jerusalem” tells a story of a community, its achievements and its difficulties. Furthermore, in line with the philosophy of the portal, thematic exhibitions need not today be limited by physical constraints of space and dispersion of the cultural heritage objects. Thus, the website virtually gathers the treasures of the Community of Mantua that are now dispersed all over the world: historical documents, ritual objects, maps and books, bringing together resources from a multitude of different hosts, thus overcoming the limitations of location, transport, and travel.

Go to the Mantua in Jerusalem Virtual Exhibition