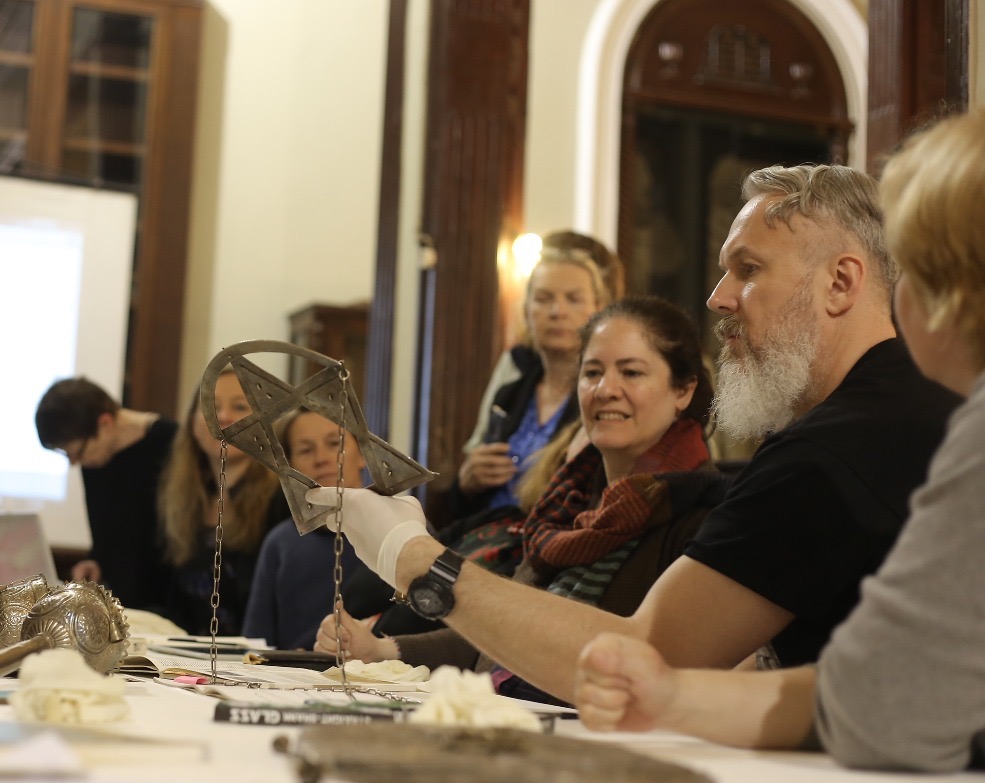 From April 19 till 23, a group of 15 curators from 11 different countries studied the Jewish heritage of Izmir – the heritage of a once flourishing Jewish community in a Muslim society. The seminar opened with an extensive tour of local synagogues. Izmir is home to a complex of adjacent ancient synagogues constructed in a unique Sephardic architectural style, dating from the 16th century. Of 34 Synagogues built in Izmir, just 13 remain, 9 of them in the old city of Izmir. Some of these synagogues which are still active today are in good shape and stand as examples of various architectural styles.

The textile collection of the Izmir Jewish community includes about 202 items: Parochot, Torah mantles, binders, etc., embroidered in Ottoman style and telling the history of the community since the expulsion from Spain. The group studied these textiles in a workshop at the Señora Synagogue (17th century) with Christina Meri (Jewish Museum of Greece) and Felicitas Heimann-Jelinek, together with Sigal Benzoor, head of the Conservation Department of the Eretz Israel Museum in Tel Aviv. 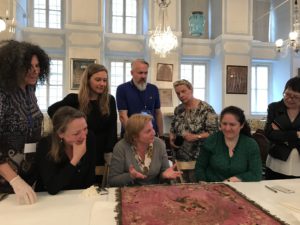 In the workshop on paper manuscripts the group took a closer look at mainly Shiviti plaques that decorate the interior walls of the Señora Synagogue. These manuscripts are late examples of the wide spectrum of Oriental painted or printed Shiviti and Menorah plaques, as well as the old, strong and lasting artistic tradition of Turkish-Jewish papercuts and collages. 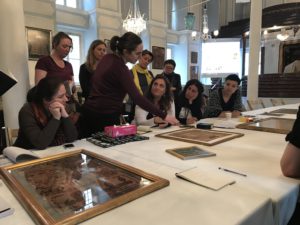 In the Beit Israel Synagogue, Izmir’s largest and still functioning synagogue (completed in 1907) the participants researched a selection of ritual metal objects from the collection of the community. These objects originate from different Izmir synagogues, some of which nowadays lay in ruins. 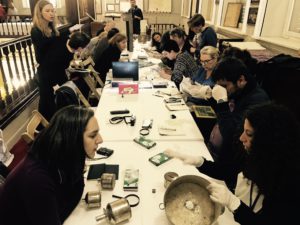 Joanne Rosenthal (Jewish Museum London) interviewed Nisya Isman-Allovi, who led the reopening of the Jewish Museum of Turkey in Istanbul after a major redevelopment of the museum. The talk focused on the concept behind the new core exhibition galleries, the considerations and challenges which this project involved – curatorially and practically – and the way the new museum has been perceived by the public.

The excursion programme brought our participants to old community house in Izmir, as well as to the archaeological complex of Sardis dating back to the 3rd century BCE that encompasses Romaniote heritage.

For this A-CEP the AEJM closely collaborated with The Izmir Project, which is conceived of and led by the Izmir Jewish Community and the Mordechai Kiriaty Foundation and that involves documentation, preservation and conservation of treasures from Izmir Jewry.