The Advanced Curatorial Education Programme in Venice was organized in collaboration with the Jewish Museum Venice. The seminar included a lecture on Italian-Jewish material culture and a workshop with selected Italian Judaica object from the JM Venice by Vivian Mann (curator emerita of the Jewish Museum New York), workshops with Venetian Judaica with Dr Felicitas Heimann-Jelinek, a tour through the Venice Ghetto and synagogues, various presentations by participant, san excursion to Padua’s Jewish heritage, a study visit to the Jewish cemetery at the Lido and visit to the installation The House of Life by Hadassa Goldvicht at the Fondazione Querini Stampalia.

Anika Reichwald, Head of Collection Jewish Museum Hohenems (AT), on the seminar:

This year’s second A-CEP organized and realized by the AEJM took place in Venice from October 15th-19th. Placed in the former Jewish Ghetto (still called “the ghetto nuovo”), the Museo Ebraico di Venezia was the cooperation partner and host for this time’s curatorial workshop. Within the five days of workshops, tours and lectures it became very clear why Venice was another right choice made by the organisers: not only has Venice a long and quite ambivalent Jewish history – including the first Jewish settlers, the history of the Ashkenazi community, the refuge of Sephardic Jews, the trade with and settling of Jews from the Ottoman Empire –, but the Venetian Jewish history is reflected in the museum’s collections as well as can be traces back to still functioning ritual places or religious spaces within the Ghetto.

A introduction tour through the ghetto on the first day by Francesco Trevisan Gheller as well as previously handed out reading material laid the first stone of what was about to become a compact understanding of Venetian Jewish culture. It was impressive to see four very different synagogues as well as prayer rooms, some of which are in use up until today. Throughout this very first insight into the Venetian Jewish world, the differences between the Sephardic and Ashkenazi traditions became apparent – especially regarding the composition of the synagogues and their interior design. This impression was intensified during a short visit to Padua a few days later, where we were able to see yet another synagogue (as well as the Jewish museum and the Jewish cemetery).

Another highlight was a trip to the Lido, where the group visited the old and the new Jewish cemetery and received a detailed introduction by Francesco to the history of the Jewish cemetery, family stories and explanations about specific symbolic decoration on gravestones sharpened our historical knowledge about Jewish life in Venice. Both, an outsider’s and an insider’s perspective of the cemetery was shown in the exhibition “The House of Life” by Hadassah Goldvicht at the Fondazione Querini Stampalia within the context of the Biennale. The artist combined various images of the cemetery with comments by Aldo Izzo, member of the Jewish Community Venice and the caretaker of the Jewish cemetery for several decades. 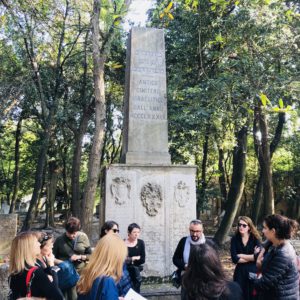 A lecture on a ’Venetian style‘ in the decoration and making of Judaica, presented by former curator of the New York Jewish Museum Vivian Mann, gave an overview over the art historical developments, which had taken place within the last 500 years of Jewish life in Venice. Her explanations found their practical component in the following workshops on textiles, metal ware and manuscripts as well as early printed books. Under the guidance of curator Felicitas Heimann-Jelinek and with the help of Francesco and museum’s director Marcella Ansaldi the group had the chance to work on various Judaica examples, always with the task outline basic information about the objects. These intense sessions showed us once again the immense difference in style and sometimes material between artefacts from the Ashkenazi and Sephardic (and oriental) communities – objects, once more, mirror the history of those who present or manufacture them. Hence, these workshops and the gaining knowledge sometime have many times helped to solve mysteries around objects from/in our own collections, as sometimes shown in the mandatory short presentations – this time presentations of ’Italian objects‘. 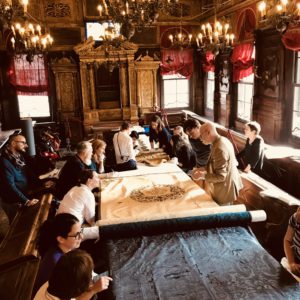 Besides the important insight into the various and rich collections of the Jewish museum, we also had the chance to have a closer look at the curatorial concept of the Jewish Museum Venice. It was fascinating to see and understand the chances and challenges of a Jewish museum, which was founded rather soon after WW2 and is so deeply connected with the still functioning urban space as well as religious places. Subsequently, it was a productive group brainstorming about the museum’s concept, which lead for example to many ideas for new narratives or/and a more inclusive concept in order to integrate the religious sights as part of the exhibition space. 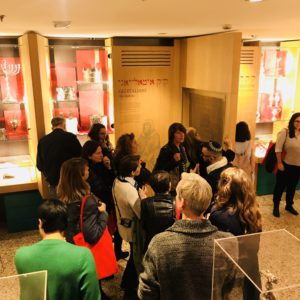 The curatorial workshop in Venice, like the previous workshop in Izmir, Turkey, gave me a better understanding of 1.) a specific history of Jews in a certain (country/ region, hence) city; 2.) the diverse development of design, decorative style and making of Judaica throughout different art historical periods; 3.) material knowledge; 4.) narrative conception, including use of text, objects, multi-media, but also existing spatial opportunities, within a museum and/or for a permanent exhibition. And over all, I had again the chance to meet new or to reconnect with known colleagues from all over Europe and exchange ideas, get/give updates on new or on-going projects as well as plan future visits to see other collections and/or exhibitions.