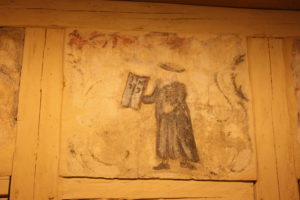 Decorations inside historical sukkah in Jewish Museum of Franconia in Schwabach

Each building had been preserved, restored and presented in a different way, which prompted many interesting discussions about how to communicate historical narratives through buildings with a Jewish history. In each location, the group was warmly welcomed by guides and museum professionals, who gave fascinating insights into the history of each building, as well as the though processes and discussions involved in their restoration. 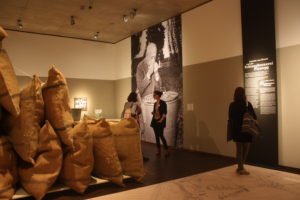 From “Beer is the Wine of this Land: Jewish Brewery Tales” in the Jewish Museum Munich

The second theme of the seminar was temporary exhibits, and workshops were given at three different temporary exhibits in different museums. Starting in Munich, the group visited the exhibit “Beer is the Wine of this Land: Jewish Brewery Tales” in the Jewish Museum Munich, and was even treated to a sample of the beer brewed especially for this exhibition. The Ulm Museum showed “Questions of Faith. Chat Rooms along the Way to the Modern Era”, dealing with inter-faith relations through the ages. The last temporary exhibit visited was “Odd”, in which the Jewish Museum Hohenems reflects on its 25-year long history through objects from its collection. 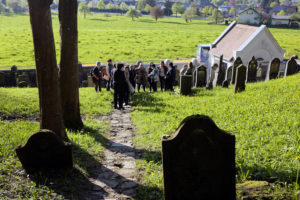 The participants agreed that it had been an intense week, filled with new knowledge, ideas, inspiration and connections. One of the participants, Anda Reuben, who is in the process of establishing a Jewish museum in a former synagogue in Mediaş, Romania, commented that: “the wealth of ideas and solutions that I have gathered from all these locations is immense. I have collected numerous notes and photographs that will later help me and my team recreate some of the solutions that caught my eye along the way. The other aspect of my participation, which will prove invaluable in the years to come, is the connection with other professionals. The network of professionals, enabled by the AEJM online forum, is a great tool for testing new ideas and for learning, long after the program is over.”
Photos: Tomasz Strug and AEJM.
The top image shows the group exploring the former synagogue in Memmelsdorf.