As last session our 5-year Advanced Curatorial Education Programme, which offered 2 session per year in different European Jewish Museums, we choose The Israel Museum as our final highlight. From October 7 till 11, a group of 18 curators from 13 different countries studied the collections of The Israel Museum with a focus on Judaica objects with European provenance.

To get an overview of The Israel Museum and a better idea of its mission as the “National Museum of Israel” curatorial tours through the main wings were organized (Jewish Art and Life Wing, Department of Israeli Art, and the Archeology Wing) and gave a first insight into parts of the museum’s collections. To sharpen their awareness for museum missions and mission statements in different contexts of national, regional or municipal contexts the participants had to prepare in advance a presentation of the mission of their museums, represented by two objects they had to chose from their museum’s collection.

As usual also the A-CEP in Israel had its focus on hands-on workshops with objects from the collections of the hosting institution The Israel Museum. In the first workshop we focused on provenance research on Judaica objects, which in the case of The Israel Museum is very special as the museum received after WWII many European Judaica objects which were declared as “heirless”. During the workshop people got to know different methods of conducting provenance research. Julie-Marthe Cohen (curator of the Jewish Cultural Quarter, Amsterdam) and Felicitas Heimann-Jelinek also presented their concept of „quovadiance research” with the help of their Handbook on Judaica Provenance Research: Ceremonial Objects that is online available through the Claims Conference. 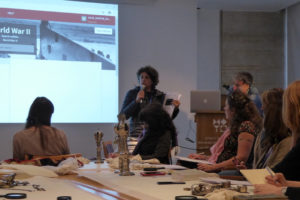 Another focus lay on amulets from different areas and periods which were presented by William Gross, who also held a workshop with various amulets from his vast private collection. 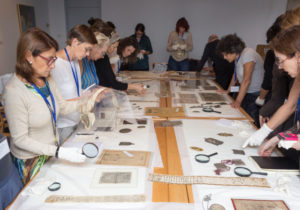 In the workshop Invention of Judaica Felicitas Heimann-Jelinek and Sharon Weiser Ferguson, curator of The Israel Museum, asked the participants to think about the question at which point/points the large body of Judaica objects known to us today was developed. Which role may mutual religious/regional influences in the modern period have played and which impact may rising nationalisms in the 19th century have had on the formation of the corpus of Judaica? 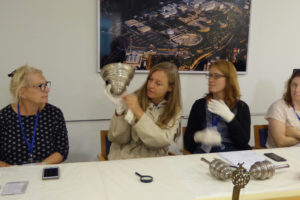 The excursion programme brought the participant to the U. Nahon Museum of Italian Jewish Art, which was very interesting for them in the perspective of the mission of this „Italian“ museum in Israel. A workshop with objects from its collection, led by Rachel Berkowitz and Gioia Perugia, focused on objects specifically targeting questions of various regional Italian patrimonies. The second excursion led us to the Museum for Islamic Art where we focused the program on cross cultural objects in the permanent exhibition as well as in the exhibition “Khamsa, Khamsa, Khamsa”. 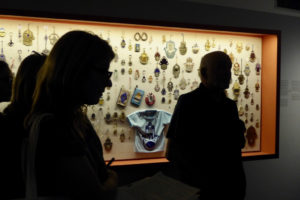 The introductory installation in the Khamsa-exhibition shows more than 2000 contemporary Khamsas bought in the streets of Jerusalem over the last months – among them Christian khamsas as well as Jewish or Islamic ones.
photo: Michaela Feurstein-Prasser ©

With the presentation The Jerusalem Biennale by Ram Ozeri and the curatorial tour through the exhibition To Go – New Designs for Jewish Ritual Objects by Sharon Weiser Ferguson the A-CEP had an focus on contemporary Jewish art and international Judaica design which gave the participants the possibility to change the perception of there own daily work. 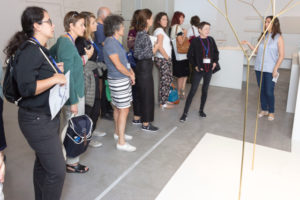 For this A-CEP we collaborated intensely with The Israel Museum – namely with Gioia Perugia and Sharon Weiser Ferguson – which very generously opened its depots for us and took out a large amount of objects for the various workshops.

The Advanced Curatorial Education Programme (2014-2018) was a joint project of the AEJM and the Jewish Museum Berlin and is kindly supported by the German Federal Foreign Office. The 2018 editions are part of the European Year of Cultural Heritage.